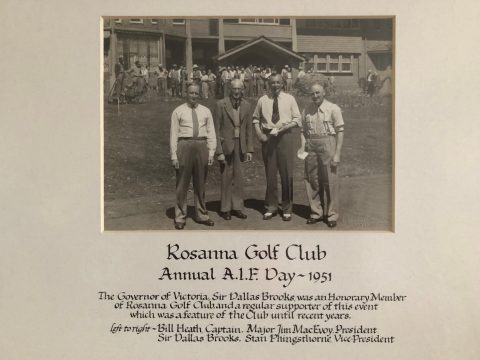 Located in the beautiful surrounds of Lower Plenty, The Rosanna Golf Club is an eighteen-hole golf course that was officially formed in 1937. The Club’s origins stem back to 1898 when the Eaglemont Golf Club was established.

In 1912, the club moved to a new 101-acre site close to the Rosanna Railway Station and renamed the Yarra Yarra Golf Club. Issues with onion grass led to the relocation of the club in 1928 to the ‘sand belt’ area in Heidelberg. In 1920, a public links course was established, and a private membership club formed soon after in 1934. A local businessman, Mr. Robert A. Treganowan, purchased the property in 1936 and the Club as we know it today was established the following year. The Club won its first pennant victory in 1950. Rosanna was developing as a suburb, and rising costs meant we needed to look elsewhere.

In 1962, the then President Mr. U. Lucas encouraged members to support the relocation to 139 acres of land near the junction of Plenty and Yarra rivers in Lower Plenty. Mr. H. V. Morcom designed a new course that was officially opened at its new home on 27th March 1965 by the Governor of Victoria, General Sir Dallas Brooks. The new site was not without its challenges, and in 1967-1968 we had one of the worst droughts in Victoria, affecting the pristine greens. In fact, they had to be hand-watered by staff and volunteer members! In contrast, the flooding of the Plenty and Yarra rivers in 1971 meant the course was closed for 8 days.

A few years later in 1974, a fire due to an electrical fault destroyed the clubhouse and all the files. Members pitched in to assist with compiling the lost records, and in September 1975 the clubhouse was rebuilt. A dinner dance to celebrate the opening was held on 4th October 1975. Extensive renovations were completed in 1994, and again in 2013 to provide contemporary facilities in keeping with a private golf club.